Half-Season roundup: Where do we go from here?

The Kraken are not drowning men, but all they want is a chance to breathe.

Share All sharing options for: Half-Season roundup: Where do we go from here?

When we last checked in with each other, we were only a week into the season, and the Kraken had played less than ten games. There were concerns, obviously, but there were plenty of positives that the Kraken could build off of if they managed themselves competently and maybe sneak into the back half of the wild card.

A few months later...maybe it was just wishful thinking or blind optimism but...yeah.

I won’t belabor any of the major things that have befallen the Kraken: Bottom of the Pacific Division, inconsistent, infuriating 2/3rds of an effort that usually come apart at the very beginning of the game or very end, multiple jobbings out at the hands of referees having trouble identifying what a kicking motion looks like, a season-long catastrophic goaltending performance crash that puts even Grubauer and Dreidger’s positive performances into question, Fancystats that build up to a team that’s ultimately just kind of okay...and the cherry on top of the shit sandwich, the heart and soul forward Brandon Tanev being out for the rest of the season.

Only Seattle could have a season start not just so poorly, but so bizarrely poorly. The results have been more or less understood, but how we get there seems destined to drive people nuts, and for good reason.

And you know what? maybe we shouldn’t have expected Vegas levels of success out of the gate, that’s fair. That only happens with a lot of help from GMs not being particularly wise to what they have in their cupboards and this time they probably had the wherewithal to recognize that the Kraken were still going to play games at some point. The Kraken still got a pretty decent team out of this, at least on paper...but in practice? Things feel off, and it’s translating to hair-pullingly poor play on their worst nights.

Let’s talk it out.

Look. I’m perfectly willing to say that I was cautiously optimistic about Dave Hakstol’s hire.

It felt like a decent start; maybe a little overly safe, but otherwise perfectly sound. It felt like a smart choice to get a guy who, at bare minimum, understands the NHL’s ins and outs, has shown at least a modicum of success at the NHL level, and how to navigate it as best as possible under less than ideal circumstances.

The caution came largely from how badly his system reacts to live fire in an NHL game.

See, Dave Hakstol was previously the coach of the Flyers, and his tenure with them was...controversial, to say the least. They were an otherwise okay team in a division where it’s really not a good idea to be just okay, and the goaltending under him was frequently quite bad in a way that is, and I am being very generous here...unsettling.

But ignoring that ominous bit of concern, Hakstol’s coaching is one where two things happen in tandem: The team’s offense starts out at the blue line, and all the finishing happens out in front of the goaltender. If anything at all happens to change that, it’s practically an astrological event. There are better experts like Em on this site that could better describe the implications of such events, but over here in mere numbers land we see that ultimately it feels like...yeah. 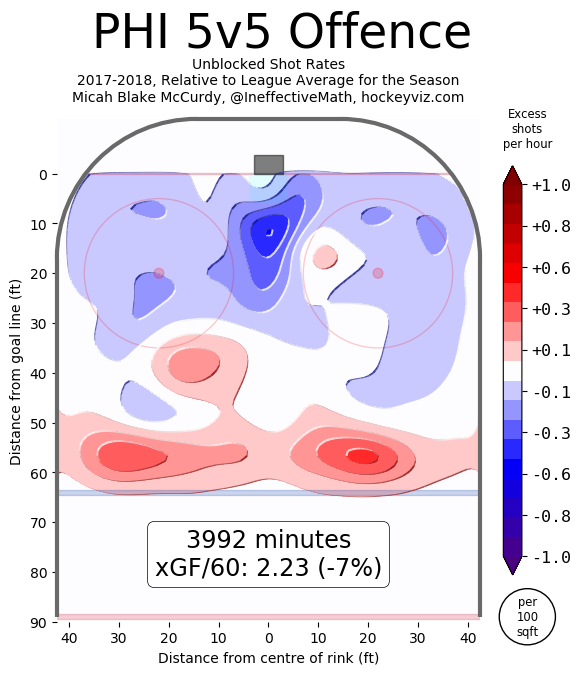 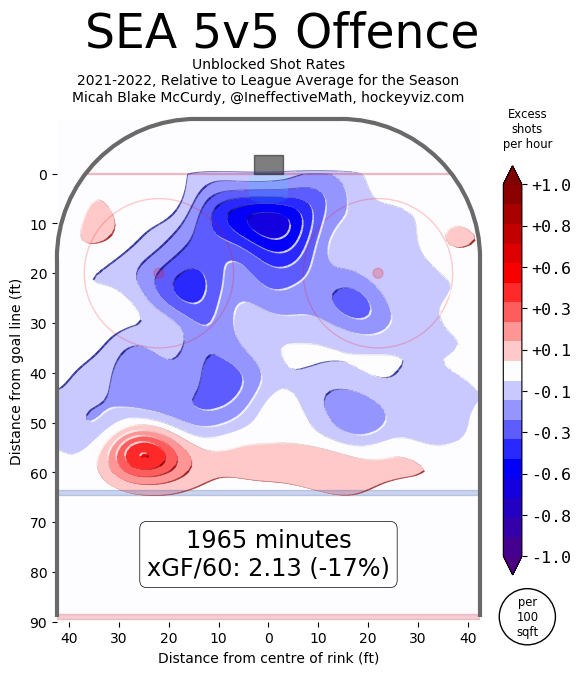 These charts are heat maps; showing roughly, over the course of 60 minutes of hockey, the location of where the Flyers during one of Hakstol’s three years as Flyers head coach, and the current Kraken season.
Micah McCurdy, Hockeyviz.com

...Yeah, it feels like a lot of the offense still flows from where Hakstol likes putting it and I hate to be the bearer of bad news, that’s not really where the quality shots go in from.

In search of what constitutes a complete, disciplined effort

The big thing that inflicts the Kraken is the need for a 60 minute game, or rather the fact that they’ve maybe had one or two in half a season? The rest are either marred with having to hold the door in a mad scramble to not blow a game, or trying desperately to claw their way back into games with no guarantee of success.

Further, a major issue that has reared it’s hideous head is that after quite a good run of playing fairly disciplined hockey, the Kraken have begun to pick up some very aggravating penalties that have sunk otherwise winnable games. Some players are gaining a reputation for taking said penalties, such as Jeremy Lauzon, and that is a bad place to be.

They’ve gotten tantalizingly close numerous times to the point we’ve spoken about pulling the goalie in these situations, but the general theme remains; the Kraken appear to be fighting for every minute of hockey, and then after a specific point it flips and there’s nothing to be had. It’s infuriating.

Part of this could just be COVID and the scrunched schedule!

Look, as much as we’d rather lop our hand off at the wrist than deal with another year of this nonsense, but the Kraken have been just as susceptible to this nonsense as any other. Players have gone into protocol in and out, losing players for two weeks (now five days) at a time sucks the life out of whatever momentum they happen to gain in any particular game, and it can hurt a team. You obviously have to work with the hand you’re dealt, but most card games don’t have rules for the dealer to random take cards away. If the Kraken come back next year and are locked into a wildcard spot because they actually got to keep most of their players on the roster, then we can chalk most of this up as the “Beta” version of the fully formed Kraken.

But it is affecting this team quite a bit.

Oh yeah, and that Goaltending and Team save percentage...thing.

I don’t even know what to say to that, honestly. Much of the woes the Kraken have faced have ultimately come from once in a lifetime level bad goaltending, particularly from the guy they anticipated from the beginning of the season to be their starter in dearest Philipp Grubauer. His year has been so bad I genuinely think we’re going to finish out this season and he’s going to have been playing on half a lung or something like that, because generally speaking...he isn’t this bad.

Of course, he could also get some help from defense. The team’s overall save percentage is pretty bad too, which is also a bit bizarre given that a lot of the top six, when they aren’t out from injury or the other thing, are generally quite impressive players that should be able to handle themselves, and much of the defense has shown that, if given enough time, they can keep shots out, they give up the 2nd least amount of shots per game of any team in the league...but just enough shots, just enough deflections, just enough rebounds have gone through in such a way that it feels bizarrely “planned”, or at the very least like the kind of luck they give the bad guys in cartoon shorts.

Seriously just...how does any of that even happen? Did the Mon-Stars transition to hockey? Do we have to send Jared McCann and Bugs Bunny to go save Philipp Grubauer’s talent? [Editor’s note: would pay to see this movie]

So what are the Kraken’s options heading into the Trade Deadline and the back half of the season?

Thankfully, they do have options as they begin moving towards the Trade Deadline and the All-Star Break. As they take a look at what they have, they have options:

The Kraken are a myriad of things, but the ultimate issue that they face is that for a team that was intended to be a mighty, defense first sort of team and so far...they’re really not all that mighty in front of their goaltender, and their goaltender isn’t all that mighty for them. If Francis’ aims are true, then he and his management team need to get to work in evaluating what they have and what they can do with it.

The future of the Kraken already looks like it’s going to be much different than how anyone expected; it would be a good idea to get on top of it before the heat goes on.

What should the Kraken do come the trade deadline?

This poll is closed